skip to main | skip to sidebar

Pick Up a Copy

If you haven't had your fill of my sporadic rambling about topics loosely associated with bicycling you might want to your local bike shop or news stand (do news stands really exist anymore?) and get your hands on the November 2011 issue of BIKE magazine. 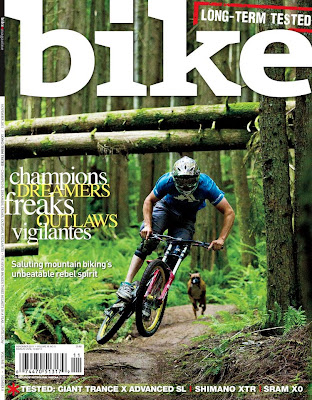 I've enjoyed BIKE magazine for years, but only once before have I been moved to actually write to them and express my thoughts. Well I wrote them again recently, mostly because I had something more important that I should have been doing and it seemed like a great way to put it off for a few minutes more. I sent my letter thinking that was the end of it. I had gotten what I needed to say off my chest, and I assumed my words would likely end up in the trash without even so much as a glance from the editors at BIKE.

Apparently that was not the case. As I was flipping through the new issue this evening I began to read the Letter of the Month in the letters section. The first sentence sounded vaguely familiar. I glanced down at the name of the author of the letter and low and behold there was MY name, in print, in BIKE magazine! It's probably the closest I've ever felt to being a rock star (lame I know, but that's the way my life goes).

Not only did they give me credit for the words I had written, in bold ink even, but they informed me that they were going reward me for sharing my thoughts with them. Supposedly I am to be the recipient of a Garmin Edge 200 cycling computer compliments of BIKE magazine.

Maybe they don't realize this, but they probably shouldn't be encouraging me with gifts and bold ink unless they really want to be bombarded with more of my meaningless prose.

If the Garmin thingy ever arrives maybe I'll find myself feeling self-important enough write up a critical review. If I do you can be sure that I will share my strong opinions about a piece of equipment that I have no business using right here on this very blog.
Posted by bikewrider at 10:21 PM

Blogs and Other Things Worth Reading